I started writing novels in third grade. My first story was about two twenty-somethings from a small Montana town who went to New York City in search of love. I wrote only a few chapters. A year later, I started writing my next story, Haunted House on Halloween Street. Like the first story, I never got very far.

I was mad at myself for not finishing a novel. I felt defeated. I was stuck. I was lost. I didn’t know who I wanted to be as a writer; I didn’t know what kind of stories I wanted to write. Looking back on all of it, it was silly of me to try to figure it all out. I was only 9-10 years old, after all. I had plenty of time to figure all that out. Writing was so important to me, though. I felt I had to know at that moment!

I read my first book by Nicholas Sparks in the fifth or sixth grade. When I closed the book, I bawled like a baby. Seriously, I cried a river. I was a kid; I never knew books could cause people to feel such powerful emotions. I never knew a book could make someone cry like I had. It was a life-changing moment. It was at that moment I realized what kind of writer I wanted to be. I wanted to be able to pull at heartstrings. I wanted people to feel those strong emotions just from reading words on a page.

Then Lucky Star was born.

It wasn’t long after I read the book by Sparks that I had a new story form in my mind. And guess what? I stuck with it! I started writing Lucky Star in middle school. Through the sweat, tears, and stress, I managed to finish the first draft on my 20th birthday. Six years later, I’m still editing. I will finish it, though!

If it weren’t for Nicholas Sparks and his book, my story, Lucky Star, would never have been written. And what’s the name of the book that changed my life as a writer?

Julie Barenson was only twenty-five when her husband, Jim, passed away. He left her a present before he died—a Great Dane named Singer. He had also promised to always watch out for her. Fast forward four years, Julie has a good life and she’s finally ready to start dating again, so she starts going out with Richard. He’s an engineer in town for a project. Richard begins taking her out on fancy dates and giving her jewelry. When Julie starts spending more time with her best friend Mike, Richard is jealous. And controlling. Singer growls at him whenever he’s around. Julie, sensing something is off, ends the relationship. Richard doesn’t plan to give up, though. Fans of Nicholas Sparks can expect the love to blossom between Julie and Mike. All is going well, except Julie keeps bumping into Richard. He’s everywhere she is. Julie’s phone constantly rings, but there are no voicemails. Singer is barking and growling at random times during the night. Julie fears for her life, but as long as Mike is with her every night and Singer is guarding the house, she’s safe, right? When a colleague of Julie’s is found beaten and Richard is the main suspect, Julie, Singer, and Mike decide to leave town until he’s caught. The cops begin to look into Richard’s life and unravel his shady past at the same time Richard is closing in on Julie…

I absolutely adored Singer and Mike! The story itself was mediocre. 3.5/5 stars. It was Nicholas Sparks’ first time writing a thriller. See Me is a much better thriller by Sparks. I highly recommend it. However, The Guardian will always hold a special place in my heart. I’m still waiting for the movie!

What book changed your life? 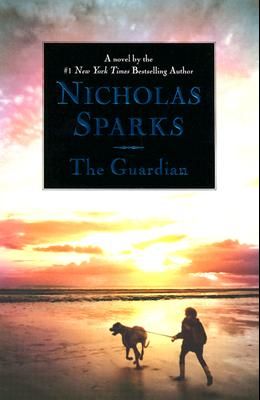