Anyway, let’s get to the review, shall we?

The year is 1995, and Franny Banks has six months left to make it as an actress before her three-year deadline is up, a deadline she gave herself. In the two-and-a-half years she’s been in New York, Franny has only landed a line in a commercial and a waitress job at a comedy club, not exactly where she pictured herself. She dreams of being on Broadway and doesn’t want to give up on her dreams and have to move back home. Things start to look up when she gets the attention of two agents and the cute actor from acting class, James. But as soon as things start to go well, things start to fall apart. With the help of her friends and roommates, Jane and Dan, Franny just might achieve her dreams someday, someday, maybe…

Someday, Someday, Maybe is the perfect light read to pick up when you feel like your dreams aren’t going anywhere, especially if you wish to be an actor. The characters are relatable and witty. You’ll be cheering—and laughing—throughout the book. It is a story about chasing your dreams, finding yourself, and finding love along the way. 4/5 stars! 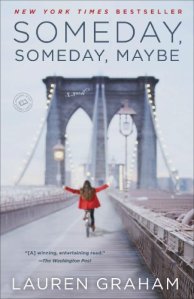